Home Work Wk 4 - The Diary of a young girl

Hey everyone! this is week 4's second home work task and for this one just like last week's activity we had to read a book and share it with everyone on our blog weather it was just a chapter or two. This book is based upon a young girl and here name is Anne Frank. Anne Frank was born on June 12, 1929, in Frankfurt am Main, Germany. Her dad was an independent business man who's name is Otto Frank and his wife's name Edith. The family of Anne Frank appreciated her sense of humor and personality. In 1993, as the Nazi persecution of the Jews in Germany increased, the Frank's took Anne and her older sister, Margot, got
emigrated to Holland. For about seven years the family's life were going very smoothly and successfully. In 1940 the Germans invaded Holland. Anne could no longer attend her school and was forced to attend a school for Jewish children. Things started to adapt easily to this situation in tell Anne's father Otto Frank had given up his position with his firm because Jews were no longer permitted to own or run business's. In 1942, on her 13th birthday she got given a red - white diary. Later on it had gotten to that time when it was decided that the family must go into hiding after they were threatened. The first thing Anne grabbed was here red - white diary she had got given.
The family hid in a group of rooms hidden at the top and back of the building used by Anne's father's firm as a warehouse and office. Soon joined a man called Mr. Van Daan, who is a Jewish business associate of Anne's father. He came with his wife, their 15 year old son peter and a Jewish dentist. Anne called the hide - out "Secret Annexe". Anne's diary is a fascinating and often terrifying account of two years that these eight people spent in hiding from the Nazis. But we can't get in to the rest of the book so we will just stop here. I hope you found this interesting about Anne and what has had to go through even though the book has just started,
Posted by Deborah at 19:40 No comments:

Home Work - Where My Family come from!!

Task Description:
Kia ora everyone! For this weeks home work just like the previous one we had to make a family tree but for this one we had to talk with our family about where they come from such as their home island, and village. Check it out!
( Feel Free To Leave A Positive Comment )
Posted by Deborah at 15:51 No comments:

Email ThisBlogThis!Share to TwitterShare to FacebookShare to Pinterest
Labels: 2021, Home learning, Home Work - Where My Family come from!!, term 1, Week 3 - 4

Task Description:
Kia ora everyone! As apart of this weeks literacy we got given an extra slide show for nouns from yesterday. In the first slide we had to find proper nouns and common nouns in a sentence. And for the last few slides we were given some hints of some nouns. What we had to do was guess what the noun was weather it was an object,  person or thing. Once we've guessed what the noun was we had to try and figure out what type of noun it was. And at the end we had to make our own little clue of our own noun we picked so if you want to check it out and see if you can guess it. Check it out
' If you want to, feel free to leave a comment saying what the noun was for the last one I made! '
Posted by Deborah at 13:54 No comments:

What Helps me write ?

Task Description:
Kia ora everyone! Today we are in our literacy class for this morning. We all each got given a peace of paper and pencil to write down or draw what helps us write. Because It was pretty hard to see on the picture I added here is what I wrote. Feel free to leave a positive comment. Check it out!
Posted by Deborah at 10:08 No comments:

Email ThisBlogThis!Share to TwitterShare to FacebookShare to Pinterest
Labels: 2021, literacy, term 1, week 4, What Helps me write ?

Task Description:
Kia ora everyone! Today we are in our literacy class this morning and we read Monday Mornings by Marco Fazzi. It was about a teacher called Josh Millar and in the book he takes us through his Monday morning routine from outside of school to in side of school. After we read Monday Mornings we had to answer some questions and at the end we had to write a paragraph of ONE MOMENT in a teacher's life outside of school. I hope you check it out and if you want to feel free to leave a positive comment.
Posted by Deborah at 10:05 No comments:

Task Description:
Kia ora everyone! Today we are back at school and currently in level 2 . Today we were given another literacy slide show to complete. For this one we had to read about a very intelligent boy who loved to brag and an innocent ice cream man who sold magical ice creams. From what we learn't in the book we had to answer a few questions and look for nouns and a sentence. At the end we had to create an advertise using anything like a poster, presentation, a poster,  a video or a radio advert. With this we had to advertise a special ice cream just like the ones in the book and also had to share how it tastes, what it does and how much it costs. I choose to make a poster to advertise my special ice cream. Check it out as well as the slide show!
Posted by Deborah at 12:05 3 comments:

The Fun They Had !

Task Description:
Kia ora everyone! Like I said on my latest post, we are currently in lock down and for we are working from home. Here is another literacy work we have here for today and the main focus for this task was nouns and adjectives. Like yesterday we had to find the nouns in the sentences and highlight it but today we had to do nouns and adjectives. Check it out!
Posted by Deborah at 11:02 2 comments:

Email ThisBlogThis!Share to TwitterShare to FacebookShare to Pinterest
Labels: 2021, literacy, term 1, The Fun They Had, week 3
Older Posts Home
Subscribe to: Posts (Atom) 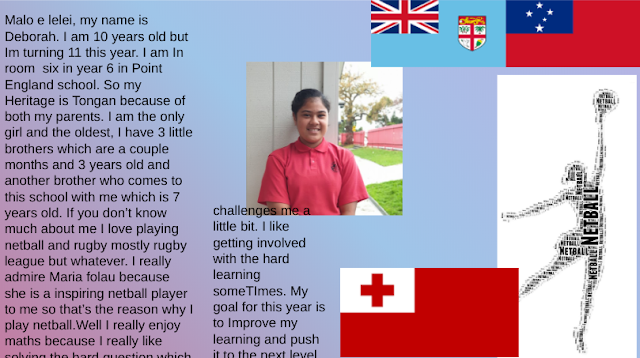 Kia ora, Malo e lelei and greeting blog readers, my name is Deborah and welcome back to my blog for 2021. You are most welcome to join me along on my blog to see what exciting things we do here in team 5. As it is finally 2021 I am now a year 8 and it is my final year at Pt England School. I am very devastated as I have been here ever since the age of 5 but what I hope to do is make the most of it this year. By doing that I hope to participate in as many sports I enjoy playing and to take as many opportunities given. This year I am in room 2 with Mrs Ilaoa and I am thrilled to experience what fun learning we will be doing this year. I am a proud Tongan that lives right here in Auckland - New Zealand. Living in a small family of six including my parents, me as the oldest out of my siblings as well as the only girl. My goals this year that I hope to successfully achieve is my reading and writing. I hope to make a huge progress in my reading level as well as my writing and that I can add more vocabulary into my writing. Although I have a great passion for math I love reading and writing because these two subjects are the ones I am able to get creative with. I have a great interest in sports such as Volleyball, Netball and maybe just a bit of rugby and more. I don’t exactly play at a club for any of these sports but I do like playing them with my family, friends and school. Most of these sports I play here at my school where we get to play against other schools / teams. It is such a blast. In my free time I love to hang out with my younger brother who is currently 2 years old as well as read a book or go on Read theory. I hope that from reading this that you know a whole lot about me and that you find an interest in checking out my blog to see what learning and fun things post on my blog. And that’s all about me.

Who is visiting this blog?